Sidney Black was born on 9 November 1911, into a coal mining family in Chopwell, then in the County of Durham in UK. Chopwell was later nicknamed "Little Moscow" because of the strong support there for the Communist Party. The village had streets named after both Marx and Lenin. Following World War 1, economic conditions in England were difficult, and with the 1926 General Strike, life became even tougher for the family. Sid was educated at the Westwood Higher School in Durham County. He left school in 1927, aged 15½ years, and tried his hand as a salesman. By the end of 1927 he was looking for other opportunities. He applied to join the Dreadnought Scheme and, in 1928, left England on SS Ballarat, arriving in Sydney on 13 June, with 39 other Dreadnought Boys.

Following his farm training at Scheyville, Sid Black was placed with a German family who ran sheep and cattle, on their farm at Carlingford. Sid stayed there for two years before heading across to the Goldfields area of Western Australia. There he spent the following years as a station hand, also in gold mining, and sometimes living rough; then it was time to move to Perth, where an older brother Frank had settled.

When World War 2 broke out, Sid was trying to make his living as a draughtsman and commercial artist. He enlisted in the Royal Australian Air Force on 18th of March 1940, and spent the next three years as corporal in the service police, with postings to Air Force bases all around Australia. During that time, he applied to be moved to aircrew, but that came to a halt when he was found to be colour blind. Eventually he moved to other work, as an Equipment Assistant. Leading Aircraftman Sidney Black received his discharge on 7 November 1945.

After the war, Sid's preferred options were to do a general art course and get back into commercial art, or to reenlist in the Air Force. He was actually accepted for service in the Interim Air Force, but decided to find other employment, this time in the Commonwealth Public Service. Sid worked in various government departments in Canberra, such as Air, Immigration, Treasury, Supply and Army. After moving back to Sydney, he was employed in the National Roads and Motorists Association before re-joining the Public Service. His last work before retirement in 1980, was with a firm of stockbrokers. Sid Black passed away in 1989, aged 77 years.

Sid Black is best remembered for his black and white artwork. While he was in Western Australia before the war, Sid started his "other job" as a freelance cartoonist, with his artwork appearing in The Sunday Times into 1946. Following on from this, The Bulletin (one of Australia’s longest running magazines, produced weekly in Sydney) published his work through to the mid-1960s. In around 1959, Sid was responsible for the design of most of the covers for The Bulletin.

In 1999, 10 years after Sid's death, there were two exhibitions in Sydney which included his work. These were the “Artists and Cartoonists in Black and White” exhibition at the S H Ervin Gallery, and the complementary “Australians in black and white: (the most public art)” exhibition at the State Library of New South Wales. Examples of his work are held in the Mitchell Library in Sydney.

Perhaps a look back, to his own time before becoming a Dreadnought Boy, inspired Sid's cartoon "Wistful thinking". Drawn originally in black and white, this sepia version comes from the cover of one of our Dreadnought publications. 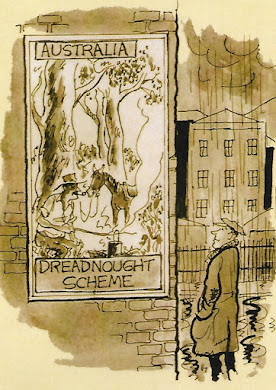 Posted by JohnDBson at 23:48 No comments: