John Eric Frith was born to Henry and his wife Kate in London, in 1906. John’s father was employed as the Bootmaker-Shopkeeper in Kings Road, Chelsea. In the 1880s the Frith family had been well known suppliers of footwear to the gentry of London. John’s father became ill and died in 1909. The family had, by then, moved to 359 Kennington Road Lambeth.

John’s school years were not good years for him. He was at boarding school, a savage place with brutal masters. ‘The food was Dickensian before the war but it was double-Dickensian when the War was on....’ Sport and art were of most interest to John in those years, but art had a distinct downside. ‘I got belted more than the average kid at school because I could draw the masters. I really got whacked, and I was not encouraged at all for my drawing ability……..….

Other than his mention of being a jackaroo, little was known about John Frith’s first visit to Australia until recently. In the difficult years after World War 1, John spent a lot of time with his grandparents at Wrotham in Kent. Encouraged by his grandfather, John developed an interest in farming and applied to travel to NSW under the Dreadnought Youth Migration Scheme. He was accepted and boarded the new SS Moreton Bay, just back from its maiden voyage. John, aged 15, was one of a group of 40 Dreadnought boys. After six weeks at sea, he reached Sydney on 22 May 1922. Along with four other boys from the group, John was sent to the Cowra Apprentice Farm run by the NSW Department of Agriculture.

The farm training at Cowra covered horse work, ploughing, milking and fencing and other farm tasks, under the direction of the farm foreman, a man of tough discipline. In September 1922, having completed his three months training, John was employed at Mr Jack Scott’s dairy farm at Warwick NSW (near Cowra on the Lachlan River). He was the first of four English Boys to have worked at the Scott farm.

All Dreadnought Boys were required to write home to the UK once they had been placed in work, so we can only guess what John said in his letters. It’s also uncertain as to how much John’s mother knew or approved of his travel to Australia, but on 23 April 1923 when the SS Hobsons Bay docked in Sydney – Kate Frith was here to take her son home!

Back in London, John began work with Sale and Company, one of the six private banks behind the Bank of England. He had been there nearly four years, when he was sent to Yokohama in Japan. John turned 21 on the voyage between Vancouver and Yokohama. Evidently, his drawing of the firm’s chief in London had led to the preference for him to be given this plum job overseas. For the next two years based in Japan, John did much the same as he had been doing in London. He did have some time in Korea, which was annexed to Japan at the time. However, even with the firm’s range of agencies (for example, Rolls Royce) and the freedom his motorbike provided, the job soon became boring. It was time to move on.

In late 1929, John was aboard ship on his way back to England from Japan when he arrived in Sydney. He disembarked for a day, and, he decided the ship could go without him. John Frith was back in Australia. But the Depression was now biting hard and, for the next three years especially, life was tough. John Frith had some money when he arrived, but fell victim to a confidence man. ‘I was literally left with threepence in a foreign country.’

Soon, art was to intervene again! John’s snapshot sketch of Premier Bavin in Martin Place was accepted by the Bulletin. He was paid for the sketch, but also given a job. John took the opportunity to develop his art, to combine his skill as caricaturist with the calligraphic techniques he had discovered in Japan, to teach himself a full range of creative techniques, so that he could then call himself an artist. After two years, John Frith became the Deputy Art Editor of the Bulletin.

On 30 June 1932 the new P&O liner, RMS Corfu, reached Sydney – Kate Frith was here again! This time for the marriage of John to Dorothy Mae Horseley.

John had fourteen most interesting years at the Bulletin, working with Norman Lindsay and Ted Scorfield, as the three permanent artists, in a relaxed club-like atmosphere. John Frith was always grateful for the encouragement and help he received from his colleagues at the Bulletin.

In late 1944, John joined the Sydney Morning Herald as its first cartoonist. It was not long before he made impact, especially with his cartoons of Arthur Calwell, who became federal Minister for Immigration in July 1945. John was at the SMH for five years, finishing in February 1950, when he was recruited to the Herald and Weekly Times in Melbourne. As part of the negotiations, John was able to secure a good house in Kew which he subsequently purchased. He remained at the HWT as cartoonist until he retired in 1969. By the time he left Sydney for Melbourne, John had modelled and cast in bronze, some 150 heads of distinguished Australians.

When he retired in 1969, John Frith went to Europe, first to England - where one cold winter was enough, and then to Algeciras in Spain. While in London, a five thousand years old piece of terracotta in the British Museum ignited his interest in the material. Back in Australia, John began making hundreds of pieces. Some were made for Bendigo Pottery and included a range of toby jugs of famous Australians. He also made a range of Reform flasks. These were based on the Prime Ministers of Australia.

A family man, John drew for children as well as for adults. Retirement provided time for more pottery, caricatures and cartoons, and picture stories for the grandchildren. Eventually, John Frith moved into Moorfields Community Aged Care, in their Broadmead Hostel in Hawthorn Vic. John was still able to draw two hundred cartoons on the big whiteboard at Broadmead. In time, aging took its toll and his eyesight failed. John Frith died on 21 September 2000, aged 94.

In July 2001, the Museum of Australian Democracy at Old Parliament House in Canberra, launched the exhibition, A Brush With Politics: The Life and Work of John Frith. This popular retrospective showed works spanning his long career; with wide appeal it ran for months longer than first planned. It was then developed into a Visions of Australia travelling exhibition, which toured interstate. A Brush With Politics was a fitting way to celebrate John Frith’s life. 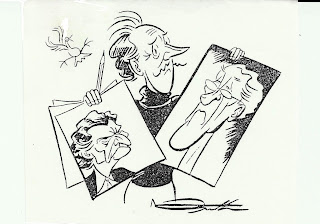 ACKNOWLEDGEMENT
We are indebted to the Frith family for their generous provision of material for this story and for their permission to use the photographs and drawings provided.

Posted by JohnDBson at 19:35 No comments: