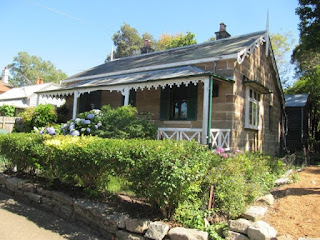 (Courtesy of National Trust of Australia)
George Ernest Armstrong Anderson was one of the quiet ones. Born on 17 November 1911 in Bury, Lancashire UK. In 1926, he applied to come to Australia under the Dreadnought Youth Migration Scheme, just as his brother, Hugh, had done the previous year. His younger brother, Horace, followed in 1928. He sailed from London on the Baradine reaching Sydney on 18 November 1926, the day after his 15th birthday. George was immediately sent to the far North Coast to the Wollongbar Agricultural Experiment Farm, for three months training. His first placement was at Binna Burra (near Bangalow NSW), but later moved on to the Central West area near Parkes, in 1928. George subsequently found work as a clerk and then as a mechanic. His family had followed him out to Australia, settling in Sydney, where George joined them.

When he enlisted in the Australian Army, on 20 October 1939, George was working as a lift driver in O’Connell Street Sydney. In the army, he was captured and escaped twice from the Germans on Crete. George was discharged on 15 September 1945 on compassionate grounds, having been a prisoner of war. On his return to Australia, he joined the militia (CMF) reaching the rank of Captain.

While he was away, in early 1941, George’s mother Alexandra moved to Hunter’s Hill, to Vienna Cottage. This became George’s home for nearly 50 years, he was its last tenant. This home is a small artisan’s cottage in Alexandra Street Hunters Hill, built in 1871. Being one of the suburb’s older stone buildings, it is of great interest to local history buffs. It is owned by the National Trust of Australia. Living in the cottage on his own after his mother died, George devoted himself to his garden – with his beloved roses, azaleas and especially his rows of annuals. Getting up at 4am, he had his breakfast and read the paper, then into the garden. A brief break for lunch then back again until dusk.

George was not a communicative man and some people found him brusque and unfriendly. But his neighbours remember the kindness he showed to their children. He was bemused as to why people found Vienna so important. However, he tolerated the inevitable invasion of his privacy and was always co-operative with the local members of the National Trust. When he moved to the Narrabeen War Veterans’ Home in 1991, George left a challenge for the Trust which had no hope of keeping such a high-maintenance garden, while wanting one which recaptured something of the brightness of its past.