On 24 August 2019 the Wollongbar Primary Industries Institute celebrated 125 years of operation, with an open day. There was a good public response to the displays showcasing the Institute’s many activities. Laboratory and farm tours, fishing clinic, demonstrations such as the working dog, and the heavy-lift hexacopter highlighting the use of drone technology.

For many years this place was known as the Wollongbar Experiment Farm, and what we saw was very different from what the Dreadnought Boys who came here, would have known 100 years ago.

The Farm was involved in training of farm apprentices soon after it was established in 1894. Within 20 years, the strong association with the Dreadnought Scheme had begun. This relationship was on display in the Library, which showed the Farm history through books, documents, photographs and other memorabilia. 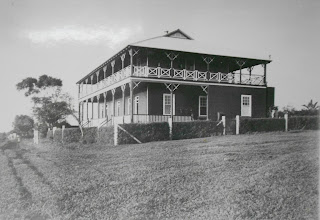 Living quarters and offices in 1913


The Dreadnought display centred on the original registers, where members of the public could look up details of a forbear who was trained at Wollongbar. It was great to see the enthusiasm as enquirers read details shown for their particular relative - even when the comments noted about his conduct were confronting.

The Registers showed that 502 Dreadnought boys were sent there for training. The first boy arrived at the Farm on 27 December 1913. Geoffrey Kingston Shaw (19) who came from Surrey in England on the Ballarat, stayed at the farm for seven months before going to work at a store in nearby Alstonville.

The last Dreadnoughts to train at Wollongbar were Edward Uriah Griffiths (18) and his brother Charles Stanley Griffiths (16) who arrived on the Oronsay on 21 November 1929 from Swansea in Wales. 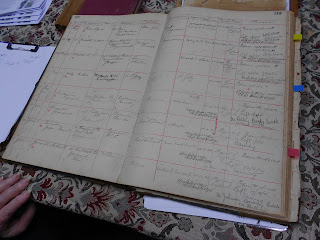 
The normal stay at the Farm was for three months of training. A select few went on to work at the Farm, but the shortest stay was 11 days! This was one Bruce Cruickshank (19) who reached Sydney on the Jervis Bay on 12 March 1923, arrived at the farm on the 15th and left on the 26th. The register notes say Cleared out probably went to Sydney. There is a subsequent note giving his address as C/o Gus McNaughton, The Tivoli.

Gus McNaughton, a comedian and actor from the music halls of London, was in Australia and performing at the Tivoli Theatre in Sydney at that time. Cruickshank had given his previous occupation as Music Hall Artist and probably knew McNaughton in London. We know that McNaughton returned to UK and went on to be a film actor in 72 films, including two with director Alfred Hitchcock. We don’t know what became of young Mr Cruickshank!

Posted by JohnDBson at 23:48 No comments: