The Armistice which ended World War 1, now 102 years ago, is still remembered on the 11th November each year. Walter Brunton Brownlee was one of those young men who did not come home. As we reflect, Walter is of those we can remember.

Walter was born in late 1896 in Liberton on the southern outskirts of Edinburgh, Scotland, and was the fourth son of dairyman Arthur Brownlee and wife Mary. With war looming, 17 -year-old Walter linked up with the Dreadnought Scheme and, on the 13th October 1914 (10 weeks after the Declaration of War), left London's Tilbury Dock on the SS Indrapura bound for Australia.

He was one of a group of 18 boys who reached Sydney on 3rd December 1914, where 5 of them were sent for training while the other 13, including Walter Brownlee, were sent direct to their employer.

Walter was placed with John Affleck at Nabiac, about 240 kilometres north of Sydney. Affleck ran a motor service between Taree, Nabiac and Tuncurry, and had come from the same place in Scotland as Brownlee. After 6 months of being 'shaped up', the sturdy young Walter Brownlee went to dairy work with Mr W H Abbott of Wallamba, where he proved his worth. However, change was coming to the farm, so Walter Brownlee decided to take up sleeper cutting, and soon became skilled with the broad- axe and adze.

In news from Liberton, he discovered that two of his brothers had enlisted in the British Army, and Walter felt the strong need to enlist also. But Walter Brownlee had a problem, he was only 4ft 111/2 in. tall. Despite many attempts to enlist, wherever he went he was continually rejected, because he was too short. By April 1917 he'd moved to Sydney, and had joined the No.2 District Guard at Marrickville. Having put his age up 8 months to be over 21 years of age, and rounded his height up to 5ft 0in., Walter Brunton Brownlee was finally successful in enlisting on 3rd May 1917 - at his 16th attempt! 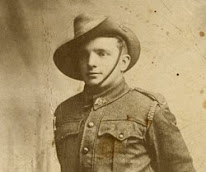 Walter Brunton Brownlee
(from AWM P08321.001)
He sailed from Sydney on the HMAT Euripides, and in April 1918 was in northern France with the 3rd Battalion AIF. He was wounded in action on the 19th June and died the following day. He is buried in the Borre British Cemetery, and is remembered on both Liberton and Nabiac War Memorials.

Walter Brunton Brownlee was clearly a young man of great determination.
Posted by JohnDBson at 20:11 No comments: