The recent fires, which ravaged the Tabulam area in northern NSW, remind us that a number of Dreadnought Boys began their farm life in this area. William Arthur John Woodford was one of them. In 1927 Arthur left the Isle of Wight, as a boy of 16 years and 6 months. He travelled on the SS Beltana with 39 other lads. Some of them were to become life-long friends. Quite a few of Arthur’s classmates from the Grammar School in East Cowes had made plans to go together, but as the time approached only Arthur proved to be the adventurous one, as the others pulled out for one reason or another.

Arthur’s diary of the voyage out showed that, apart from some “blue moments”, it was a remarkably good journey. One day out from Fremantle, on 31 October 1927, Arthur and those travelling with him were paid £2 “landing money”, as well as the assisted passage and the pocket money while in training. On arrival in Sydney on 18 November, Arthur was sent to Grafton Agricultural Experiment Station for his farm training. With him were five others from the SS Beltana, including his mate Les Bown.

Having left behind a loving mother who had just lost twin infant daughters, a young sister, his father and a large extended family on the Isle of Wight, and many friends, Arthur was now placed with a new family – the Hollidays, near Tabulam. Their farm had 800 acres with 7 horses and 97 cattle (according to a 1928 pastoral directory).

Like other boys who were more academically inclined, Arthur Woodford took the opportunity to read widely at night to further his education. There were also good opportunities to be involved in community activities. In later years he would recall riding with other lads to bush dances at the end of the week, with their musical instruments in tow, and then, riding back after the dance to arrive just in time for milking.

However, the Depression changed things for everyone on the land. Both Arthur and Les Bown (who had worked near Casino), headed north and spent time in the Queensland cane-fields. 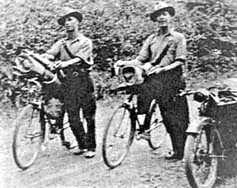 (Les Bown and Arthur Woodford on the way to the canefields.)
Dreadnought Archives
Arthur returned to UK in 1935, but only stayed a year, as he said he ‘felt hemmed in’. He came back to Australia and, in 1936, married Sally. In due course Arthur joined the prison service and worked for the Corrective Services Department in various positions, such as gatekeeper at Maitland Gaol and librarian. He later became a court recorder at Newcastle Supreme Court. He was well-respected in all these positions, and in retirement he wrote a training manual for court recorders.

His decision to travel as a Dreadnought Boy was well and truly justified. Arthur loved the island he came from, but he had made a new life in Australia, and became a respected part of its community, especially in the Hunter Valley Region of NSW.
Posted by JohnDBson at 21:23 No comments: