The Covid-19 pandemic which has been sweeping the world, with its savagery and endless tragedy, has reminded us of the spread and trauma of the Spanish flu just over 100 years ago. Dreadnought boys and their families were amongst the millions marked by that flu pandemic. Leslie Butler and his family in UK certainly were.

Leslie was born in Mexborough, Yorkshire, in September 1911, the elder son of Percy Marsh and Ada (née Butler). Growing up not far from the home of his Butler grandparents and their children, who in age were more like older brothers and sisters, his life in Mexborough was content. There were some difficulties in his early school years because of a bullying Victorian headmaster, as well as suffering from what we know now as dyslexia. But family, friends and sport made up for these.

When the world influenza epidemic reached Great Britain in 1918–19 Leslie was stricken with a severe attack, nearly losing his life - but he was nursed back to health by his mother. Tragically, she then caught this Spanish ‘Flu and died just after the Armistice was signed, on 21 November 1918. The family was devastated, and although father Percy tried to cope, he and the boys eventually moved in with the Butler grandparents, as part of their extended family.

Leslie had developed a strong love of cricket, became an accomplished cricketer for his age, and kept that love of the game all his life. He did well at school and on leaving received an excellent reference from his teacher. It ended by noting that Leslie was a boy who will grow up with a strong sense of responsibility and fitness for his work.

The teacher would be proved right. From school, Leslie was apprenticed at the L.N.E.R. Locomotive Depot in Mexborough in 1925, and settled into the trade, making many friends there. When his father remarried, a disastrous relationship with his stepmother ensued. Those final years were very difficult, and he looked at emigrating to Australia, eventually signing up to come to Australia under the Dreadnought Scheme, to make a new life.

Leslie Butler arrived in Sydney with 40 other boys on the SS Ballarat on 19 December 1927. With four others he was sent for training to Cowra Experiment Farm and in early 1928, after farm training, was sent to work on Wattamondara Farm, 14 km south of Cowra. This farm was part of the original Wattamadara Station which, at its peak, was a pastoral lease of 23,000 acres. It was broken up for closer settlement following the passing of the New South Wales Crown Lands Act of 1884. 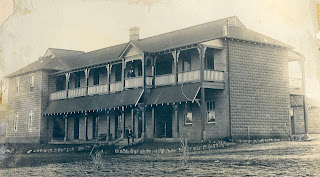 Cowra Experiment Farm office and accommodation block.
(Dreadnought Archives)
Leslie was to spend several years in “mixed farming” work (and cricket) in the Wattamondara area. Eventually, he travelled up to Campbelltown, then still a rural area outside Sydney, to work on Jock Laird’s pig farm. In Campbelltown he met and married Eva Emily Beasley in 1935.

They later moved back to Wattamondara to work on the land, by which time the Second World War had started. From 1941 to his discharge in September 1945, Leslie served in the Volunteer Defence Corps of the army, posted locally where vital food supplies were being produced. This meant that his base was close to the POW Camp at Cowra. When off duty he was still able to play in the Wattamondara Cricket Team.

The Prisoner of War Camp at Cowra was built in 1941-42, to house Italian POWs captured during World War II. The first ones were marched into Cowra in October 1941. By the end of 1942, the camp had over 2,000 prisoners and internees. Between January 1943 and August 1944, over one thousand Japanese POWs and internees arrived. But at 1.50 am on August 5, 1944, about 1200 Japanese prisoners launched a mass suicide attack on the Australian soldiers guarding them. Crudely armed and poorly protected, the Japanese threw themselves on to barbed wire fencing and into the lines of fire from machine guns. With buildings burning behind them, some 350 Japanese managed to escape. All escapees were recaptured during the following week. Altogether 107 POWs were wounded, and 234 prisoners and five Australian soldiers died, in the Cowra Breakout. A Japanese war cemetery and the beautiful Japanese Gardens in Cowra, now mark a very different international relationship.

Leslie Butler never discussed his farm life, and lost connection with his English relatives. It was only in the mid-1990s that those in U.K. discovered that Leslie was a Dreadnought Boy, but that no-one seemed to know him. In 1995, good news came to them from the Salvation Army - his Australian family had been found. Sadly, Leslie had died of cancer in February 1984, and his wife Eva had died in a car accident in 1991.

With the Australian Butlers being put in touch with their English relatives, a whole new Butler network was established, after a gap of nearly seventy years.

Posted by JohnDBson at 00:13 No comments: