In the recent television series Who Do You Think You Are? one episode looked at the forebears of Kurt Fearnley, the celebrated Australian paralympian. It included the story of his grandfather Harry Fearnley, a Dreadnought Boy. It showed excellent footage of Harry who worked for some years at Coombing Park, an extensive grazing property at Carcoar NSW, and who had become the manager of this historic station. Another Dreadnought success.

In research for this programme, it emerged that there were two Dreadnought boys named Harry Fearnley!
The first Harry to arrive came on the Demosthenes on 14 April 1923, with 58 other boys. Kurt Fearnley’s grandfather arrived with younger brother Jack, on the Beltana on 2 October 1924 in a smaller group of boys. Somehow this group was missed when the records we use were compiled by the Trust staff. They did come in a very busy period for the scheme, when all the other groups had at least 60 boys at a time. 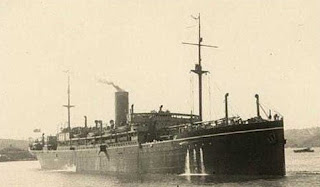 Unfortunately, the programme quoted a wrong figure for the total number of boys in the Dreadnought scheme. The official numbers were 1787 boys brought out up to the First World War with another 5669 coming between the two World Wars. Some additional names were found in training farm records plus extra arrivals such as Jack and Harry Fearnley’s group. This brings the total up to 7,500 Dreadnought Boys – a significant achievement.

Posted by JohnDBson at 22:26 No comments: