The Dreadnought Association lost a good friend and strong supporter when Alan Gill passed away on 23rd February this year.

Alan George Frank Gill was not a Dreadnought Boy, but, had come as a migrant from UK with his wife, Daisy, in 1971. He worked with the Sydney Morning Herald as a journalist and, for many years, was the Religious Affairs Reporter for the Herald. Here he met with leaders of all faiths – from the Pope to the Dalai Lama, Mother Teresa to the Archbishop of Canterbury, and many others.

Alan was a man of compassion and insight and this was reflected in his newspaper work and his later writing. In 1985, Alan Gill won a Walkley Award for excellence in journalism. In 1995, Alan was recognised for his services to the media when he was made a Member of the Order of Australia.

Alan Gill’s interest in the Dreadnought Boys dates from 1974 when he first met Arthur Braun, and then Norman Monsen a few weeks later. Alan joined the Association and got to know many Dreadnoughts in the years that followed. 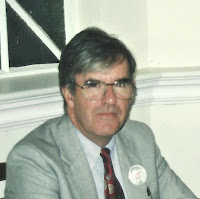 Alan Gill at the 1994 Reunion and AGM
(photo: Association Archives)

In retirement, Alan Gill wrote the ground-breaking book Orphans of the Empire (1997) where he exposed the realities of British child migrants and their treatment. Then came Interrupted Journeys, Refugees from Hitler’s Reich (2004). This was followed (in 2005) by Likely Lads and Lasses, Youth Migration to Australia 1911-1983, and in this comprehensive book, he included stories of individual Dreadnought Boys.

When the Association celebrated the Centenary of the Dreadnought Scheme, in 2011, Alan played a key role in its success. Alan had always looked after his fitness with ocean and harbour swimming and dancing with Daisy as partner, but in recent years his health declined. He died a month short of 81 years.


We salute you Alan Gill.
Posted by JohnDBson at 21:14 No comments: