Anthony Kibblewhite was born on 26 August 1906, in Singleton, Sussex UK, the fifth child of James and Clarissa Kibblewhite. Soon after his birth, his father was appointed Headmaster at Steyning Grammar School, where Tony was subsequently educated.

During his school years Tony became deeply involved with the scouts (becoming a Kings Scout) and the choir of the Steyning Church of England. The church and music would remain key interests for him throughout his life.

When 11 years old, Tony lost his right eye in an accident, during a game of darts. For the rest of his life, he used a German-made glass eye. The loss of his eye meant it was virtually impossible for him to be accepted into the public service or the armed forces, with such a disability. Different options were needed; leaving England seemed best.

Originally travelling to Kenya, Tony changed his plans at Cape Town, and continued on to Sydney with the friends he had made on the SS Balranald.

Tony Kibblewhite (16)
Arriving in Sydney on 7 June 1923, Tony was included in the Dreadnought Scheme and went to Scheyville Training Farm. After only a few days, it was realised that he could already milk cows and harness horses, and he was immediately sent to the Thomas Family at Possum Creek, near Bangalow on the Far North Coast of NSW. To get to Possum Creek, he travelled 650 km by coastal steamer to Byron Bay and then bus to Bangalow.


At the Fred Thomas’ farm, Tony soon learned the dubious pleasure of being a ‘farmer’s boy’—milking and ploughing for five shillings a week. Quite fortunately, he contracted shingles which led Mrs Thomas to fire him from his job. It was ‘fortunate’ because the Matthew Swain family, who had earlier come from Steyning to Knockrow, had received a letter from Tony’s father, about him being at nearby Possum Creek. Mrs Swain immediately took him in and cared for him. Mr Swain arranged a job with Tom Blow who was clearing and draining dairy land, on the Newrybar Swamp. With young Frank Swain as a partner, Tony was able to purchase that farm. He commenced dairying whilst living in the ‘humpy’ on the land, and also worked on drainage projects to supplement his income.

In 1929 Tony married Marjorie Swain, who was a piano teacher, and after selling his share of the farm, began cream-carrying from Knockrow to the factory at Binna Burra. Tony and Marjorie had two children Ruth (1930) and Tony Jnr (1932). In 1938, after an extended family holiday in England, Tony purchased the Newrybar Bakery. The family continued its association with music during World War 2, performing at the many concerts in the district, during those years. Tony was able to enlist in the Australian Army in 1942, as a foundation platoon member of the Volunteer Defence Corps at Newrybar, and served to war’s end as corporal.

In 1946, the family moved to Byron Bay where Tony began a long career in real estate and valuation. He eventually retired from this in 1990. Prominent in public life, he was for many years Vice-President of Byron Shire Council and a member of the Parish Council of Byron Bay Anglican Church.

Tony at a Dreadnought Reunion (1994)
Tony became a life member of the Australian Labour Party, having maintained his membership since 1927. His retired life was full with lawn bowls, beach fishing, the Byron Bay Literary Institute, amateur theatricals, the Masonic Lodge and, of course, singing. 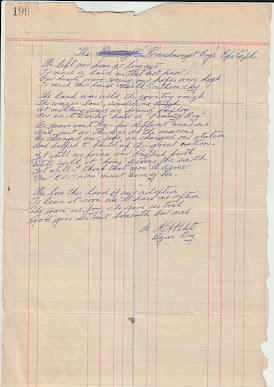 We recently gathered for a celebration of Tony Kibblewhite Jnr’s life. Tony had passed away, aged 88, in late 2021 during a time of Covid restrictions.

When Tony's father came to Australia in 1923 on the SS Balranald, as one of the 7,500 boys brought out under the Dreadnought Scheme, he settled in the Northern Rivers area of NSW. In time, with other Dreadnought Boys in the area, Annual Reunions began. It was almost inevitable that his son Tony became involved, when the Far North Coast Dreadnought Association was subsequently formed.

Tony led a full life and was an active member of his community serving in the local RSL, Legacy, and the Airforce Associations, singing in the All-Saints Choir, and friend to many.

Tony played a significant role in the Dreadnought Association for the best part of 30 years. He became President in the 1990s, and it was under his leadership that moves were made publish stories of the Dreadnought Boys. That culminated the first book in 1998. Tony continued as Vice President and then on committee until 2018, when the Association wound up.

In acknowledging Tony's contribution to the whole Dreadnought Association, we valued greatly Tony's support, and his cheerful and constructive approach, and from those who made up the Association over the years - THANK YOU Tony!

Posted by JohnDBson at 20:33 No comments: